I Don't Miss You Anymore... 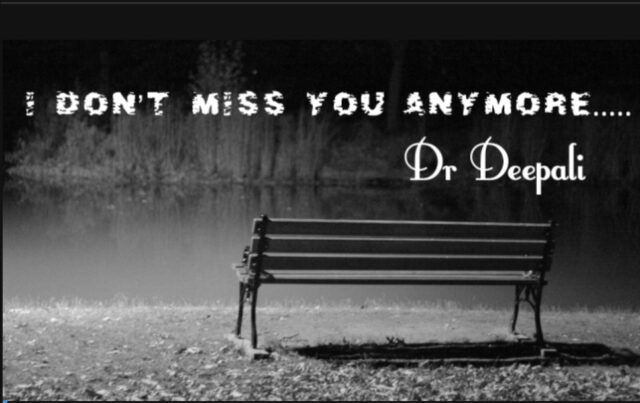 Another Holi, another Holika Dahan.
Holika, a conflagration which engulfed my entire being, which reduced my dreams to ashes and I helplessly stood witness to this agonizing spectacle of my own life.
Spring loses its identity to the riot of colors that nature showers on the ‘Palash’ and ‘Mahua’ trees. The pleasant cold eagerly embraces with outstretched arms the warmth that the incoming summers offer, soon to lose its existence and melt into the long, scorching Indian summers and as if to solemnise this colorful union we celebrate ‘Holi’.
The memories of one such Holi still impart vivid colors to my dreams, memories of the first time when I saw you. Well, met you actually, because you were entirely covered, literally painted with colors, so I didn’t know then what you really looked like. But it didn’t matter, because I had already lost myself into those pools of honey, those warm hued eyes that conveyed affection and tenderness.
You smeared me gently with gulal, causing my innards to completely melt and with as much courage I could muster I asked you your name, ‘I have just wrapped you up with a bit of myself, I’m Abeer’.
Abeer, as colorful as his name, painted my life with the shades of love. Abeer who flooded my life with his affection, his adoration and I just got lost in the deluge. Abeer the fragrance of morning dew that engulfed my senses. Abeer as warm as the hues of sunset, that dispelled the gloom of the long lonely nights.
His eyes conveyed a million feelings without having to articulate them. They spoke a language of their own which only I could understand. They held an unspoken promise which was intended for me alone. Eyes which could read my thoughts even before I could formulate them and shoo away all my worries. Eyes which held in them a light which reached my soul and guided me through my turmoil.
My evenings faded away into nights as I melted into his embrace and his kisses which could convey immense tenderness and ignite deep passions at the same time. And life seemed an unending rosy dream as we lay entwined on the crumpled white sheets with the breeze cooling our passion slicked bodies which had just stopped convulsing after an earth shattering union which also fused and cemented our souls in the act.
But destiny has its own designs. Even nature at times conspires against you when it cannot accept your unadulterated happiness. It does not let you decide on your own fate and intervenes with its own cruel hands snatching away what you thought was yours forever.
A beautiful sunset, the sky exactly the color of Abeer, resplendent, glorious with impossible shades of pink and orange splashed carelessly on a magnificent canvas. As we rode under this splendid canopy enveloped in a bubble of our own, Abeer had to suddenly brake his bike trying to avoid hitting a street urchin who suddenly sprinted on the road. What followed was as I had seen it through a red mist. Abeer lying there on the road, writhing in pain, his face covered with fresh blood oozing out of a big gash extending from his forehead and disappearing into his silky hair.He gasped for a few seconds as he stared deep into my eyes with those honey brown eyes, his face painted red and then the light in his eyes vanished forever.
Abeer disappeared from my life suddenly, abruptly and prematurely that day. No farewells whispered, no promises made. He took away half of my soul along and I live on with the other half, the half that he had given me. The pain hasn’t diminished even a little bit, but I don’t miss Abeer anymore, he lives on with me, he lives within me.